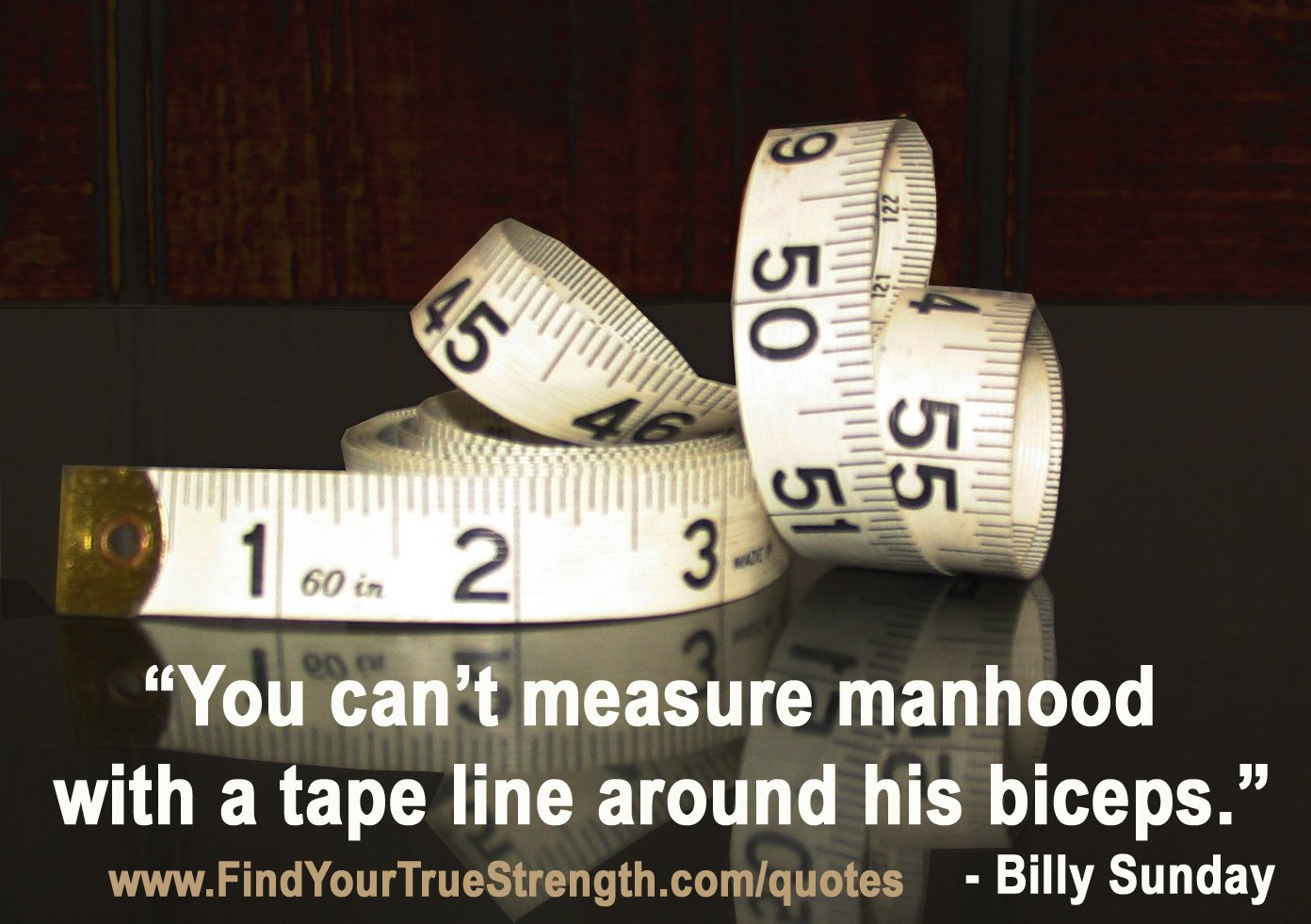 In this post, you’ll find twenty-two quotes about real men. Do they fit your definition of manhood?

“You can’t measure manhood with a tape line around his biceps.” ― Billy Sunday

“Boys become men in the presence of a clear vision for manhood.” – Robert Lewis

“The real man is one who always finds excuses for others, but never excuses himself.” – Henry Ward Beecher

“Stand true to your calling to be a man. Real women will always be relieved and grateful when men are willing to be men” – Elisabeth Elliot

“The boy and the man must be raised to see the possibility of self-worth, then meet a few others who provide the vision of a road toward it, then spend a lifetime pursuing that worth through action and relationship. One of the great tragedies in human life is to be born a male and not be guided toward the value of a man.” – Michael Gurian

“The narrator analyzes that the maturing, passing away boy within him, “had issued me a challenge as he passed the baton to the man in me: He had challenged me to have the courage to become a gentle, harmless man.” – Pat Conroy

“Of all men, Christians should work especially hard, giving more than an honest day’s work for a day’s wage.” Richard D. Phillips

“The central problem of every society is to define appropriate roles for the men.” – Margaret Mead

“Wise societies provide ample means for young men to affirm themselves without afflicting others.” – George Gilder

“A man must at times be hard as nails: willing to face up to the truth about himself, and about the woman he loves, refusing compromise when compromise is wrong. But he must also be tender. No weapon will breach the armor of a woman’s resentment like tenderness.” – Elisabeth Elliot

“Stop looking for the path of least resistance and start running down the path of greatest glory to God and good to others, because that’s what Jesus, the Real Man, did.” – Mark Driscoll

“Moral courage is higher and a rarer virtue than physical courage.” – William Slim

“Men, you’ll never be a good groom to your wife unless you’re first a good bride to Jesus.” – Timothy Keller

“There are two questions a man must ask himself: The first is ‘Where am I going?’ and the second is ‘Who will go with me?’ If you ever get these questions in the wrong order you are in trouble.” – Sam Keen

“A man is at his youngest when he thinks he is a man, not yet realizing that his actions must show it.” – Mary Renault

“I teach my sons that there are really only three rules to being a good man. The first rule is to fish often. And by fish, I mean find the quiet times to fish around in your minds for what is most important. The second rule is to protect everyone smaller than them. This means physically smaller, and in all other ways… protect the more vulnerable. The third rule states that if something is truly important to you, then you should prove it. You say you would lay your life down for someone, but will you give them the busiest five minutes of your day, if they need it?” – Spuds Crawford

What Are Your Favorite Quotes About Real Men?

Do you have a favorite quote about real men or manhood?

Any cookies that may not be particularly necessary for the website to function and is used specifically to collect user personal data via analytics, ads, other embedded contents are termed as non-necessary cookies. It is mandatory to procure user consent prior to running these cookies on your website.